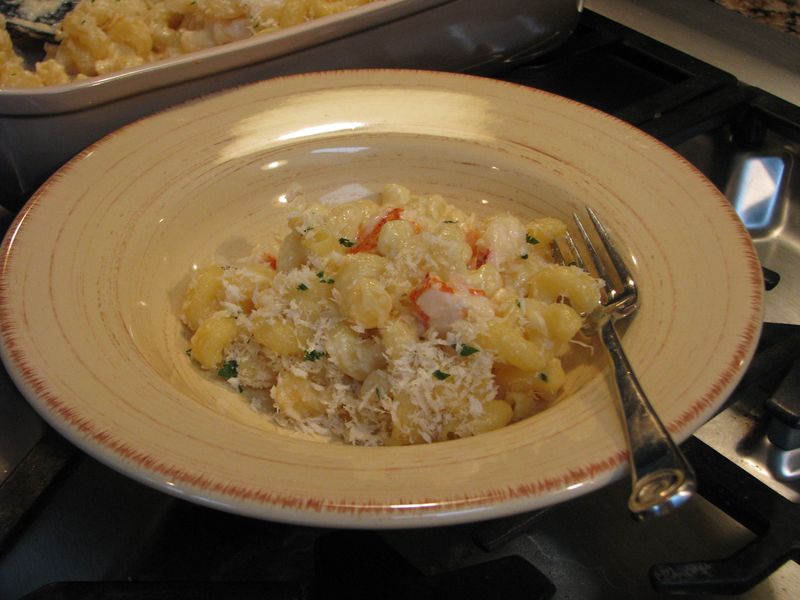 Back a few months ago, I got my first taste of Lobster Mac and Cheese. We went out to celebrate our friends, Mitch and Sue's 30th wedding anniversary. As an appetizer, we ordered the Lobster Mac and Cheese and it was delicious. Several week's later, my sister, Karen, my daughter, Danielle, and I met at the Fat Cat Restaurant in Quincy for some appetizers and a few drinks. The Fat Cat had been highlighted on one of the food networks for amazing Lobster Mac 'n Cheese. We knew we were definitely ordering some of that, once again it was amazing.

Two week's ago I was food shopping and I love to pick up Hannaford's FRESH Magazine. They always have some good, local recipes that are seasonal to the food available in the region. For summer it's fresh fruits and vegetables as well as seafood, which for New England is lobster or correctly pronounced LOB-STAH. I noticed there was a recipe for Lobster Mac 'n Cheese from the Three Chimneys Inn in Durham, NH. Talk about perfect timing, we had just been at a Lobster Boil at Mitch and Sue's and they gave us some left-over lobster. Freshly boiled lobster and a really cheesy recipe, I was ready to go.

This recipe calls for four different types of cheese (Gouda, Provolone, Asiago and Sharp Cheddar) and then I added one of my own. With all the ingredients, I thought this recipe was going to be an ultra creamy recipe, but it really wasn't and I'll tell you why in a bit. It was fairly easy to put together and before I knew it, I was getting ready to place it in the oven. As an avid macaroni and cheese fan, I like something crunchy on the top. Whether crackers or bread crumbs...and yes, my mother occasionally put potato chip crumbs on top, I needed a topping. This was when I added the 5th and final cheese - Parmesan with a bit of Panko bread crumbs.

When the Lobster Mac 'n Cheese was done, I couldn't wait to dig in. This was when I noticed that it looked a bit dry. I was a bit disappointed thinking I may have cooked it too long. I was hoping for an amazing dish. I scooped out a portion and grabbed my fork. As I took a bite, it was AMAZING. The cheese was perfect, a little smoky and the flavors were rich. My next bite included the lobster, I began to understand why it wasn't as creamy. The taste of the lobster with the macaroni and cheeses was perfect, the cheeses didn't overpower the lobster, if anything it complemented the dish. This dish was delicious but it didn't last long. There were lots of second helpings leaving one dish left for lunch the following day.

I can't call this a New England Classic, but if you haven't tried Lobster Mac 'n Cheese, I suggest you put that on your tasting "bucket list". It's really a delicious twist on traditional mac 'n cheese. My suggestion, buy some lobsters and enjoy them, make sure you have some extra lobster meat so you can make the Lobster Mac 'n Cheese...you won't be disappointed.

salt, pepper and butter, to taste

Preparation:
1. Bring a large pot of water to a boil with a tablespoon of salt and add the pasta. Cook until al dente, about 8 to 10 minutes, drain, and transfer to a large bowl to cool. Add one tablespoon of butter or olive oil to keep the pasta from sticking.

3. In a large saucepan, bring the white wine to a simmer, then add the shallots. Simmer over medium-low heat until shallots are tender and wine has reduced by two-thirds, about 20 minutes.

4. Sprinkle flour over the shallots and stir until the liquid is absorbed and the flour just begins to color slightly golden, about 4 to 5 minutes. Using a hand whisk, add cream and heat over low heat until hot to the touch, stirring frequently to avoid sticking or burning. Be very careful not to let it boil, as the mixture may separate.

5. Gradually stir in the first four cheeses (Gouda, Provolone, Asiago and Cheddar) into the hot cream in four or five additions, stirring constantly with a slotted spoon and allowing each addition to melt before adding the next. Continue until all the cheese has been incorporated and the mixture forms a smooth, thick sauce.

6. Pour sauce over the pasta and stir well to incorporate. Stir in the lobster meat. Spread the mixture into the pan and smooth the top. Cover the dish with foil and bake until the mixture begins to bubble, about 15-20 minutes.

7. Mix together the Parmesan cheese and the bread crumbs. Remove the foil and sprinkle the mixture on the dish. Continue to bake for an additional 10-15 minutes. The mixture will be slightly golden, but do not overbake. Let the Lobster Mac 'n Cheese rest for 5-10 minutes and then serve.

Join Our Email List
For Email Newsletters you can trust. 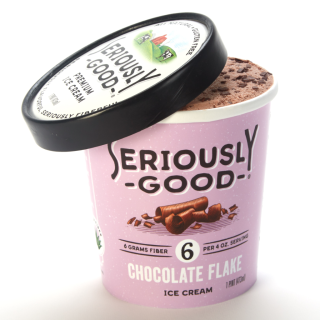